The project is on budget and on schedule for first gold production in the June quarter of 2022, with operations now entering the final stages of the construction and commissioning process.

The project is on budget and on schedule for first gold production in the June quarter, with operations now entering the final stages of the construction and commissioning process.

The company also now has its site leadership team in place, with overall Red 5 recruitment 93% complete.

Red 5 Managing Director Mark Williams said, “We continue to meet our milestones at King of the Hills as we approach first gold production next quarter. 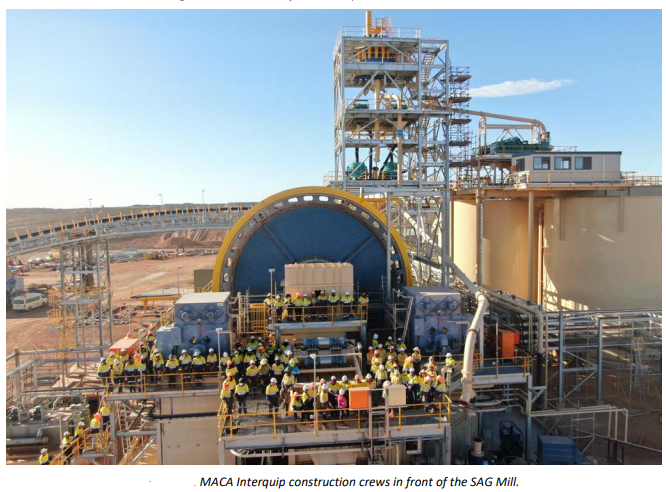 ➢ The pipeline has been installed, hydro-tested and is expected to be commissioned by mid-March 2022;

➢ The commissioning of the power plant and the battery storage facility is in progress and the installation of the solar park is in progress; and

➢ Installation of piping and electricity for the SAG mill and the leaching circuit is in progress.

Commissioning of the SAG plant is expected to begin later this month, once electrical installation and plant piping are complete.

➢ Craig Hatch, Operations Manager, is an experienced mining engineer whose previous roles have included mining manager for BHP Nickel West, technical services manager for Khoemacau Copper Mining’s Zone 5 copper mine in Botswana and underground mining manager at the mine of gold St Ives in Western Australia ( gold fields). The Director of Operations will alternate with the General Manager to oversee all operational activities centered around the KOTH hub.

➢ Andrew McRae, Mine Manager (Open Pit) is a mining engineer, who has held several senior technical and management positions over the past 10 years, including at Evolution Mining’s Cowal gold mine in New Wales. South and senior positions in iron ore operations at Koolan Island and Koolyanobbing in Western Australia.

➢ Oliver Keene, Mine Manager (Underground) is a mining engineer, who has held several underground mine manager positions including at the King of the Hills underground operation, Andy Well gold mine (Doray Minerals) and the Cosmos nickel mine (Xstrata Nickel).

Williams added: “Given the widespread labor shortages Western Australia is currently experiencing, I am particularly pleased that we have been able to assemble such an experienced and well-accredited site management team, led by our Director general of operations, Neal Valk.

“This team has exceptional experience in all aspects of site operations and is now on the ground overseeing the start of production at this major new gold operation.

Red 5 released a build overview video from March 8, 2022. It can be viewed here.

Williams said: “With surface mining underway and the crusher circuit activated, I encourage our shareholders to watch our latest overview video to get a sense of the impressive scale of this world-class operation.”

Pretty but Invasive: Stopping the Spread of Monkey Flower