Bonnie F. Jacobs, a paleobotanist at Southern Methodist University, writes from Ethiopia, where she studies fossils of ancient plant and animal life. The current field season in Ethiopia’s Mush Valley is funded by a grant to Ellen Currano of the University of Miami, Ohio, National Geographic Society Committee on Research and Exploration.

This winter’s field season in Ethiopia is my tenth since I started working there, and despite my experience, I am filled with anticipation. Our project is relatively new – studying rocks and fossils from an important period in history, 22 million years ago – and the location, Mush Valley, is also somewhat new to our team (the last year, it was our first fundraising trip here).

Mush Valley is only about 160 kilometers northeast of the modern capital, Addis Ababa, but it looks like it could be thousands of miles away. Very little city life intrudes into the villages of Upper and Lower Mush.

What really takes me away from it all are the exposed rocks and fossils by and along the Mush River. They offer us an exciting opportunity to document life, climate, landscape and atmosphere 22 million years ago. As we dig into blocks of fine-grained sediment – ​​mostly shale – for clues to the past, the central role played by this ancient period is still in our minds. 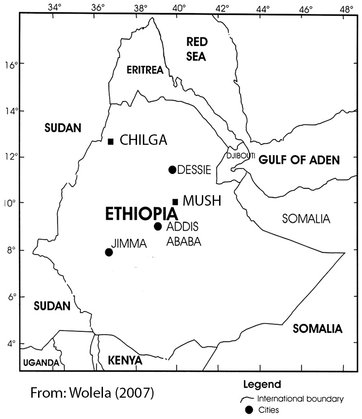 Why is it important to know the Ethiopian plateau 22 million years ago? The Mush Valley preserves plants and animals shortly after the establishment of a land connection between Afro-Arabia and Eurasia – a land connection which marked the end of Africa’s island status and which was used by animals to migrate between the two previously separated land masses. . By examining the fossil record from this period – before the formation of the Red Sea – we can get a clearer picture of which species survived this great migration and which did not.

A handful of island mammal families unique to Africa that were present 26 million years ago are absent from sites younger than Mush, but some originally Eurasian families are found in their place. Circumstantial evidence points to the influx of invaders as deadly competitors responsible for the demise of ancient African mammal families – including Arsinoitheres (an extinct rhinoceros-like mammal), some elephant families, and some relatives of hyraxes living.

When and how did this happen? Did it happen suddenly, very quickly, or maybe more gradually? And what can the historical record tell us about the evolution of Africa’s modern iconic mammals and the potential effects of mixing native and non-native animals today? 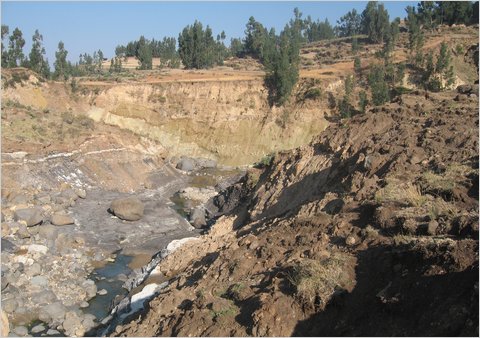 Bonnie F. Jacobs A view of the Mush River near Addis Ababa, with its dark shales containing fossils.

We have already found mammalian bones in Mush – as yet unidentifiable – in addition to incredible fossil frogs with preserved soft body parts. We hope to find more! And we wonder: will there be extinct forms among them, or will the fauna look modern?

We will also look at the plant world and ask the same questions. We have already studied fossils that are 27 to 28 million years old and come from an area called Chilga, northwest of Addis Ababa. It is known that the Ethiopian plateau was covered with forests of trees, shrubs and vines whose relatives are found today in the now separated forests of central and western Africa on the one hand, and eastern Africa on the other. ‘somewhere else. We believe that an increase in the length of the dry season 27 million years ago caused the loss of these plant groups on the Ethiopian plateau. But when did the flora change, and can we find evidence of such climate change?

Many people believe that the eastern and western forests separated with the development of the arid and semi-arid East African Rift, a gash in the land that stretches for thousands of miles from the Gulf of ‘Aden and the Red Sea through Ethiopia, Kenya, Tanzania and Malawi. . But the fault only began to grow about 15 million years ago. Will the 22 million year old flora of Mush be essentially the same as that of Chilga?

We noticed a big difference between the forests of Chilga and what we have found so far in Mush. At Chilga we found palm fossils in rocks throughout the deposit basin – they were ecologically important 27-28 million years ago. Today, palms are rarely important in African forests and are not diverse. We know from fossil pollen that palms flourished when tropical Africa and South America separated about 70 million years ago, and they continue to thrive in the Amazon and Southeast Asia. . 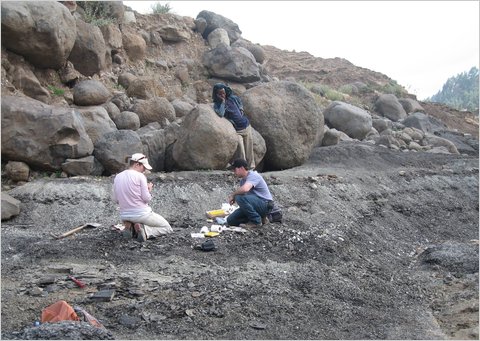 If palm trees were still present and important 27 million years ago in Chilga, when did they disappear? We can’t wait to see if any palms show up in Mush. If present, what type are they? If they are absent, does that tell us anything about climate change – or was there another reason?

Past climate can be assessed from fossil plants – the shape and size of their leaves, and by comparison with where their living relatives live – and various other measurements from rock records that are independent of plants. We are able to estimate the average annual temperature and the average annual and seasonal precipitation. The ability to use more than one way to estimate the climate and the rest of the physical environment is part of what makes us so excited about our work.

Past climate estimates are useful for testing the accuracy of computer-generated global climate models (useful for estimating future climate scenarios) and for understanding how the Earth’s climate system works in general. Climatologists often run models that are supposed to represent a moment in the past to see if they can generate a global climate system that is consistent with what is known from estimates from fossils.

The data is woefully poor for tropical latitudes, and we expect the estimates from Mush and Chilga to be useful for these kinds of studies. Perhaps more importantly, there is currently some scientific uncertainty about climate over the interval between 27 and 22 million years ago – and more data is needed to sort it out.

Plant fossils are beautifully preserved. They occur as compressions of leaves and fruits with the outermost organic cuticle layer on both sides of the leaves still intact. The cuticle is a waxy substance deposited on the surface of the leaf as it develops, so looking at the leaf cuticle is essentially like looking at the outermost cells of a leaf – the epidermis. Among these cells are hairs (yup, leaves have hairs), any kind of bump or ornamentation, and most importantly, stomata. A stoma is an opening through which carbon dioxide enters and oxygen and water vapor escape. I like to think of them as mouths (botanists, forgive me!). The pattern formed by cells in the stomatal openings of a leaf can help paleobotanists identify it.

Here’s another interesting thing about stomata: it has been shown that when the concentration of carbon dioxide in the atmosphere is high, many plant species reduce the number of stomatal openings on their leaves (compared to normal cells) . Conversely, when atmospheric carbon dioxide is low, stomatal density tends to increase – it’s like having more mouths to breathe. We plan to use this relationship – which must first be established or calibrated using modern plants for the genus or species of fossil plant – to estimate the concentration of carbon dioxide in the atmosphere there. 22 million years ago.

Our team on the ground this year consists of Mulugeta Feseha, associate professor of geology at Addis Ababa University; Ellen Currano, assistant professor at the University of Miami in Ohio, specializing in paleobotany and insect damage analysis; Aaron Pan, a paleobotanist who is curator of the Fort Worth Museum of Science and History; Louis Jacobs, professor of earth sciences at Southern Methodist University whose specialty is vertebrate paleontology; and Jordan Noret, a graduate student in paleobotany at Southern Methodist University.